Like humans, dogs don’t all age at the same rate. There are many factors that combine to determine the rate at which your dog ages and how long he will live. If you’re very lucky, you might have a dog like Bluey, who was the oldest dog ever according to the Guinness Book of Records. An Australian Cattle Dog, he died on November 14, 1939 at the age of 29 years, 6 months, and 12 days. Bluey is an extraordinary exception, however; as all dog owners know, the time we have with our dogs is generally much shorter.

The major factors that determine how long a dog will live are:

The old adage that one human year is equivalent to seven dog years is quite simply wrong. The longest-lived breeds will live twice as long as the shortest lived. And, the rate of aging of dogs is much different than humans, with dogs having a much shorter “childhood”. For example, a breed that has a life expectancy of 15 years is physically and sexually mature at one year, while equivalent human development takes 15 years. The same dog, at two years of age, is roughly equivalent to a human of 24. See the chart below for a more detailed look at dog to human age equivalency. 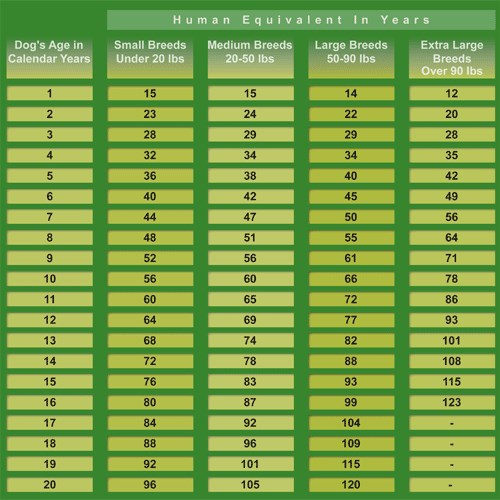 Dogs Have an Amazing Sense Of Smell